Asymptotic Flux: First Study in Entropy was written over a three month period while traveling and hitchhiking throughout Europe, surrounding time spent attending at the IRCAM Manifeste Festival in Paris and the Internationales Musikinstitut Darmstadt. As one might imagine, composing with pencil and paper while constantly on the move can be rather cumbersome, having only short periods of time available to focus, and often taking place in awkward workspaces like cafes, restaurants, hostels, and the apartments of my various hosts. Most of these environments were quite busy and chaotic spaces. This situation presented a challenge after having spent most of my compositional activity to date in an academic setting with a piano or other musical equipment readily available.

My original intent when I set out was to explore the timbral possibilities of the bass clarinet, utilizing a variety of techniques to produce complex soundscapes and microtonal sonorities that would provide germinal material for the work while unifying the ensemble. In addition to the sonorities that are worked out through sampling and spectral analysis of multiphonics, additional pitch content is generated through an acoustic analogue to a process known in electronic music as ‘single-sideband modulation,’ resulting in a series of combination tones made by adding two frequencies (for instance, a bass clarinet tone and an open scordatura string of the cello), to one another, producing a series that grows exponentially (i.e. 100Hz+200Hz=300Hz, 200Hz+300Hz=500Hz, etc.).

The title comes from an arguably conceptual device: the low E-flat that simultaneously pervades the work and is non-existent. I imagine that the ensemble is always reaching towards this E-flat as a point of centricity, but never quite arrive; analogous to an asymptote, as it approaches infinity. Entropy can be described as the “measure of the disorder or randomness in a closed system,”” or the “tendency for all matter and energy in the universe to evolve toward a state of inert uniformity.”” (source: American Heritage Dictionary). Taking some poetic liberties in reducing the scientific definition of entropy to simply a unit of measurement for chaos, one might say that this work conveys a state of high entropy in music, in stark contrast both to my previous work and to the classical tradition itself. This is a characteristic that I feel reflects not only specific elements of the compositional process, but also the result of the technical demands made on the performers, as well as my state of mind throughout the creation of this work. 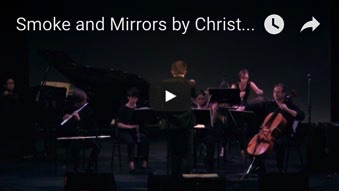