dou•ble•think : a simultaneous acceptance of or belief in two contradictory ideas; thought marked by the acceptance of gross contradictions and falsehoods, especially when used as a technique of political or self-indoctrination.

“To know and not to know, to be conscious of complete truthfulness while telling carefully constructed lies, to hold simultaneously two opinions which canceled out, knowing them to be contradictory and believing in both of them, to use logic against logic, to repudiate morality while laying claim to it, to believe that democracy was impossible and that the Party was the guardian of democracy, to forget, whatever it was necessary to forget, then to draw it back into memory again at the moment when it was needed, and then promptly to forget it again, and above all, to apply the same process to the process itself – that was the ultimate subtlety; consciously to induce unconsciousness, and then, once again, to become unconscious of the act of hypnosis you had just performed. Even to understand the word ‘doublethink’ involved the use of doublethink.” - George Orwell, Nineteen-Eighty-Four (1949)

First Study for Alto Saxophone: doublethink (Part I; 2012) by Jason Thorpe Buchanan was commissioned by Michael Rene Torres to be premiered at the North American Saxophone Alliance Biennial Convention in Tempe, Arizona on March 15, 2012. The work was completed January 12, 2012 as the first segment of a larger harmonic blueprint for a series of five to six works for solo Alto Saxophone. 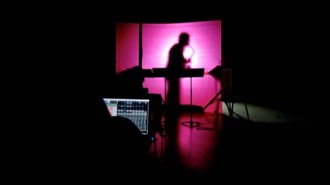