Second Study for Alto Saxophone, Electronics, and Video: pulp (2015) was co-commissioned by Matt Evans, Casey Grev, Emily Jane Loboda, Sean Fredenburg, and Marta Tiesenga. The work was premiered at the World Saxophone Congress in Strasbourg, France on July 13, 2015 by Matt Evans, and is based on the life and work of American poet Charles Bukowski. The work utilizes source materials - audio and video footage - recorded throughout Bukowski's life, such as interviews, documentaries, and poetry readings. The work gradually developed from an initial commission proposal for a work with soprano voice, alto saxophone, and electronics, to instead constrain the soprano part within the boundaries of the electronics and video. The result is a collage made up of the superimposition of source materials, newly recorded video and audio using texts of Bukowski and emulation of saxophone recordings, and video capture that is processed and composited against each opposing stream of video in real-time during the performance. Upon returning from Germany in 2011, my first project was a commission from saxophonist Michael Rene Torres, resulting in the work First Study for Alto Saxophone: doublethink. At the time, a large harmonic blueprint was generated with material to be utilized as structural pillars in a cycle of additional works for saxophone. The aforementioned blueprint consists of pitch materials that are generated through two distinct serial matrices, each gradually 'bent' by a quarter-tone from the 1st to 12th position. A sequence of multiphonics were then chosen aurally and mapped onto these pillars - in such a way that an organic succession can be felt even through dense layers of material - before composing out the space between these points with material derived both from the two matrices, and from intuitively written material utilizing pitch content from the adjacent multiphonics. These microtonal pitch fields are inevitably perceived as a mass of sound or series of gestures rather than discrete pitch class sets, and although the layers are not heard individually but as a composite, the resulting networks interact with each other and influence the listener's experience in various ways. In pulp, I began at the precise point in the blueprint where I left off with doublethink; through both subtle and abrasive computer processes, the acoustic, electronic, and video elements fuse together to form a web of rich timbres and colors. In this work, harmonic relationships are both emphasized and obscured through the use of multiphonics, vocalizations, speech, and extended techniques and tremolos meant to disrupt and destabilize explicit pitch content. The physicality in performance and fragility inherent in production of these sounds is likely the most salient feature of the saxophone writing, and serve to complement the raw, abrasive, and often vulgar nature of Bukowski's life and work.
-    Jason Thorpe Buchanan 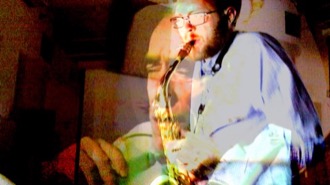 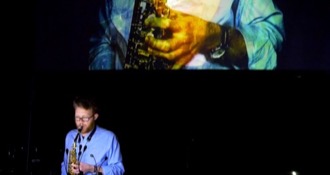 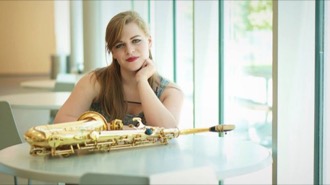