surface, tension (2018) for two performers, electronics, and live video processing is the third installment in a cycle of works for ensemble and immersive processing environment. During the performance of each work in the cycle, reservoirs of media files are created, retrieved, re-organized, and composited against one another, creating temporal, aural, and visual dissonances between past and present actions—events unfolding on stage and in media generated in real-time. The commingling of fluctuating chronologies creates temporal instability, challenges the mutability of memory, and proposes an alternative, speculative engagement with bodily-lived time.

Until recently, multimedia has offered limited flexibility for expansion, development, or reaction to live performers. In many cases, causality has been an illusion, due to fixed automation values or pre-recorded media that is simply played back at predetermined synchronization points. In response, I have worked to develop and refine an interactive intermedia processing environment in which the discrete physical gestures of performers govern the behavior of audio and video processing through wearable technology, sensors, and motion tracking. Expansion to include a dozen cameras, multiple projection surfaces, and network of computers will take conceptual and technological foundations of my previous work to a new level of integration between performers and multimedia in future works including the multimedia opera Hunger. An increased emphasis on causality and perceivable correlations between processes—the environment responding directly to physical actions of performers—will serve to refine and augment the intimate relationship between physical and digital realms.

Two cameras capture video of the performers, who are facing the audience but obscured by a large, suspended paper screen. In one hand, each performer wields a contact microphones contained within a plastic cup that serves as a resonator. In the other, a gyroscopic sensor with accelerometer traces the coordinates of their arm’s gestures, the values of which are mapped to visual and aural parameters that change over the course of the performance, controlling the processing of incoming audio and video signals in various ways. This processed audio is sent to two exciters, placed in each corner of the paper screen, transforming it into a large electroacoustic transducer—similar to a speaker cone. The contact microphones against the surface of this transducer create a feedback loop, which can be filtered or manipulated by both the position of the cup and the position of the sensor in the opposing hand. Similarly, the cameras behind the screen act as an inverted mirror, doubling and refracting the images that are captured. This system is capable of heightening expressive potency to achieve meaningful, seamless integration of technology into the fabric of a new and powerful cycle of works. 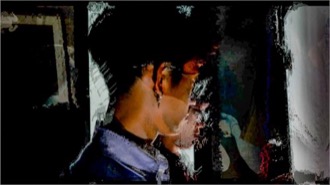